Posted on May 26, 2010 by loscabosdrumsticks

The guys from Atlantic stopped by today to pick up some wood for their summer tour.  I saw their van pull in this morning and had go say hi.  These guys travel in a work of art.  Their van is covered in notes, signatures, and quotes from people they’ve met all across North America.  See some pictures below.  Steph and I were invited to leave our mark and gladly took the opportunity. 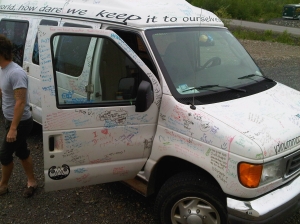 They’re heading to Ontario today to grab their new drummer before making their way down south of the boarder.  This summer they’ll be playing shows in Iowa, Michigan, Illinois, Maryland, Pennsylvania, and New Jersey before returning home for a stint in New Brunswick in August.

A group of guys from the east coast of Canada travels the open road as a worship band, believing God to use their talents in a positive way. The friends and band members call themselves “Atlantic”. The band first played and travelled together as a college ministry team in 2007, working as a recruitment team for a Bible College in New Brunswick, Canada. The journey since then has been nothing but exciting as this community of guys do life on the road to minister wherever the doors may open. 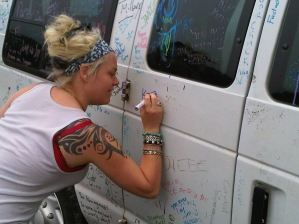 “After the end of our tour with the college we felt God stirring us to keep going,” says band member, Cory Doiron. But the band put things on hold for six months so four of them could complete school-related internships. Afterwards, the guys still felt led to tour again. After some major affirmations and provisions, the group of Canadians left on their first independent tour (June – December 2008), and led worship at churches and youth events throughout the Midwest, East Coast and various states in the United States, and a few places in Canada. The group is presently on their third major tour taking them from coast to coast (Maine to Oregon) with the fourth one ready to go!
Atlantic sees music as an avenue for them to build relationships with others while on the road. They usually stay with church families and seek to spend time talking to people after each gig as much as possible. The friends fully believe in relationships and being “in community” in every way. The guys practice communal living both in and out of tour seasons.”[Our] music is a fun story, but ministry happens relationally,” says Cory. 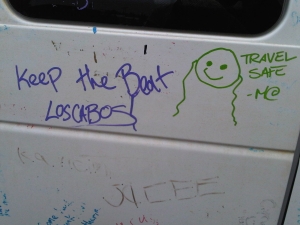 Atlantic’s path has crossed with such Christian artists like John Reuben, Everyday Sunday, Shawn McDonald, Starfield, Down Here, Natalie Grant and others over the last 2 years. Recently Atlantic has started a Non-profit organization called “Atlantic Community” to support the doors that have been opening. The Community is a group focused on doing mission work nationally and internationally. The Atlantic Community’s passions and goals are to meet and encourage people in their faith and life with strong efforts to bridge the gap to the poor and marginalized in this world.

This entry was posted in Uncategorized. Bookmark the permalink.